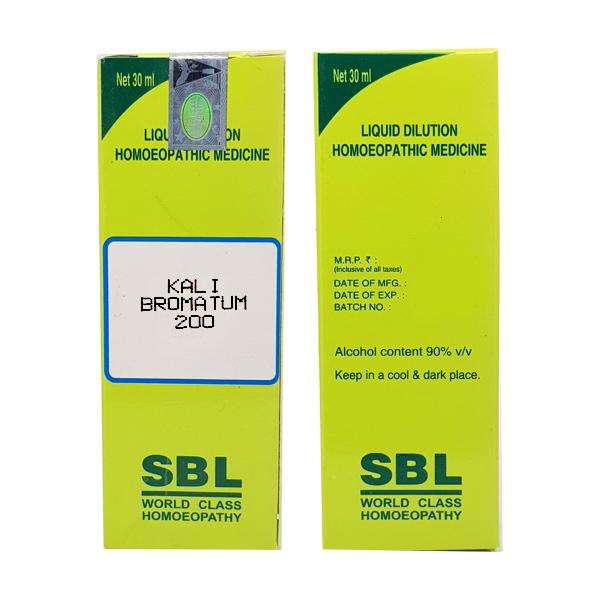 Forgets how to talk and has to be told the word before he can speak it, Stammering, slow, difficult speech.

Violent headache or numbness felt in occiput, Vertigo on stooping with Numb feeling in the head.

Watering of eyes with dimness of vision.

Coryza that settles in the larynx, throat.

Constant Persistent Hiccoughs, women who vomit their food after each meal.

Vomiting with intense thirst; of drunkards is relieved with Kali Bromatum.

Complaints associated with Intense Thirst is seen in Kali bromatum.

Constipation; stools very dry, hard and infrequent with painless diarhhoea and chilliness even in a hot room.

Pain in hcmorrhoids, fissures of rectum and painful growths is checked with help of Kali bromatum.

Hands and fingers in constant motion, fidgety of hands is marked in kali Bromatum.

Twitching of fingers with restlessness is a key indication of Kali brom.

Can not stand erect, legs weak.

Painful pustules, boils, eruption of small boils in successive crops, mostly on face and trunk, with troublesome itching is relieved with this medicine.

Side effects of Kali Bromatum

There are no such side effects. But every medicine should be taken following the rules as given.

Take 5 drops in half cup of water three times a day.

You can also medicate the globules and take 3 times a day or as prescribed by the physician.

We recommend you to take under physicians guidance.

Homeopathic products have several uses and should be taken on the basis of symptom similarity. Results may vary depending upon the conditions.

There are no reviews yet.

No more offers for this product!

There are no inquiries yet.